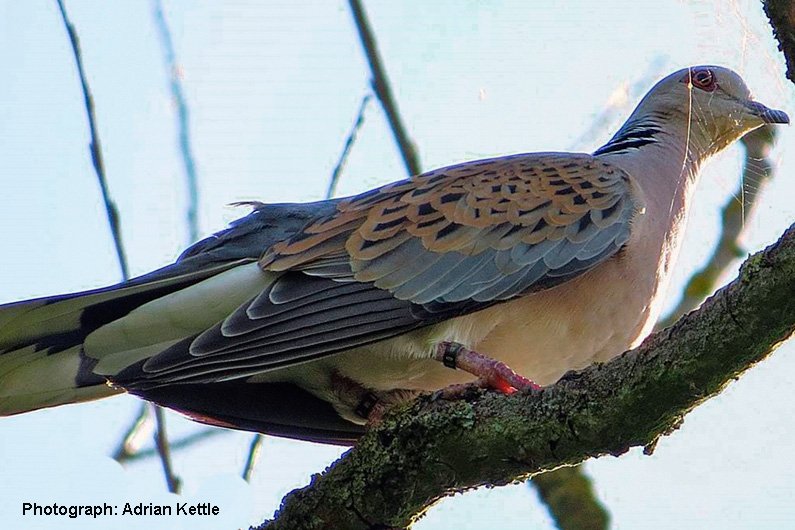 Birder Adrian Kettle tweeted seeing and photographing the above closed ringed Turtle Dove on 18/7/2020 at Ardleigh Reservoir in Essex. Subsequent research shows that this bird was captive bred at the Turtle Dove Trust’s breeding centre in North Suffolk.

Our congratulations to Adrian as this Turtle Dove has the distinction of being the first of our released birds to be independently sighted.

Going back two months from Adrian’s sighting, this male and his mate were released from the Turtle Dove’s premises and were regularly seen and heard close to the Trust’s aviaries for several weeks.

To our dismay they disappeared following some close-by disturbance by a Eurasian Sparrowhawk. However, amazingly, the story didn’t end there!

We find it extremely hard to believe that a wild bird would venture there unless it had already done so several times before with its parents.

It is our profound belief that this juvenile Turtle Dove was bred locally by the released pair, one of which turned up in Ardleigh and was seen and photographed by Adrian.

Watch this space ………. and look out for Turtle Doves with a seamless colour coded leg ring on each leg.

This website uses cookies to improve your experience while you navigate through the website. Out of these cookies, the cookies that are categorised as necessary are stored on your browser as they are essential for the working of basic functionalities of the website. We also use third-party cookies that help us analyse and understand how you use this website. These cookies will be stored in your browser only with your consent. You also have the option to opt-out of these cookies. But opting out of some of these cookies may have an effect on your browsing experience.
Necessary Always Enabled
Necessary cookies are absolutely essential for the website to function properly. This category only includes cookies that ensures basic functionalities and security features of the website. These cookies do not store any personal information.
Non-necessary
Any cookies that may not be particularly necessary for the website to function and is used specifically to collect user personal data via analytics, ads, other embedded contents are termed as non-necessary cookies. It is mandatory to procure user consent prior to running these cookies on your website.
SAVE & ACCEPT